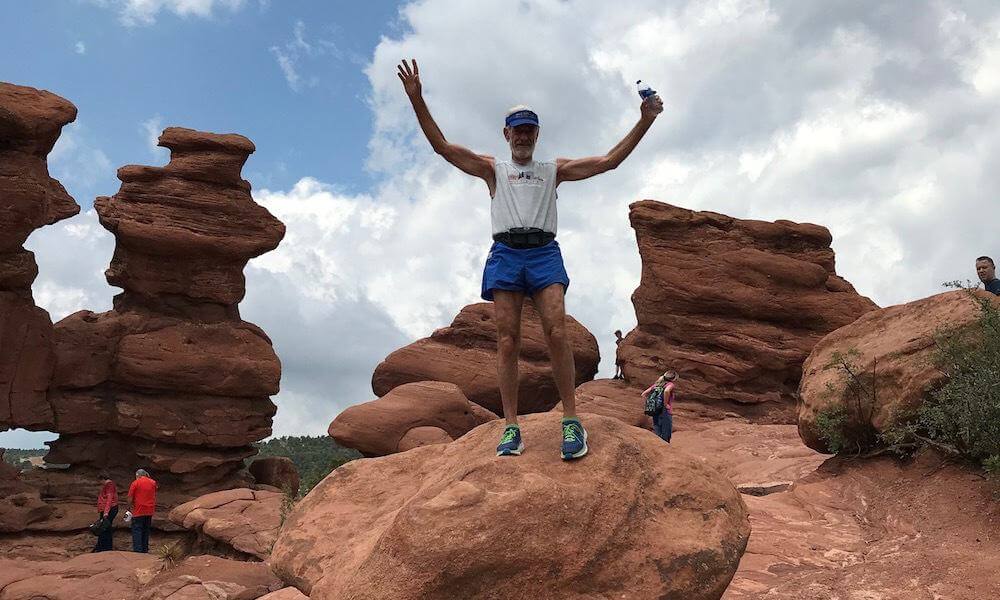 Running is an activity you either love or hate. For some, it’s a transcendental experience often compared to meditation. For others, it triggers avoidant behavior in the psyche—and somehow enhances the appeal of Netflix and pizza to a level in which excuses are disguised as logic.

But not for Jerry Dunn, America’s Marathon Man. At 72-years-old, Dunn’s completed a total of 400 marathons, dating back to 1982. He ran 60 miles when he turned 60-years-old, and then ran 65 miles when he turned 65. Guess what he did when he turned 70? Yep, you guessed it: he ran 70 kilometers. In 1993, the Indianapolis native ran 104 marathons, breaking the previously held record of 101 marathons in a year. To celebrate the millennium, Dunn ran 200 marathons that year. And, on the 25 days leading up to the 100th anniversary of the Boston Marathon, he ran 26 consecutive marathons to celebrate the renowned race. Tell us who else—let alone a 72-year-old—has accomplished this much in their lifetime?

He’s earned the title of “America’s Marathon Man”. He oozes youthful energy, a likely side effect of his superior cardiovascular health. He speaks intellectually about life, drawing philosophical parallels between running and the lessons people are intrinsically designed to learn throughout their journeys.

Dunn talks about the sport the way an artist explains a creative process: an activity that pulls them into another world. He doesn’t just pursue running with passion—he’s also figured out a way to ingrain his personality into the sport. He ran across the country to raise awareness for Habitat for Humanity—a non-profit he full-heartedly believes in. But on a smaller, less serious scale, Dunn’s run marathons in a full-jester costume, high-fiving kids on porches as he runs by. He’s also hauled ass to cross finish lines to then suit up in a tuxedo and shake hands and cheer-on his fellow marathoners as they complete their runs.

“Running is my art,” he says. “And I just want to impassion and entertain people through it.”

In conjunction with being an ultra-marathoner, Dunn’s also a cannabis advocate. He’s been using cannabis for nearly 50 years and is living proof that the stigma is unfounded. And, like many Baby Boomers, Dunn’s also a veteran. So his connection to the plant is layered, as he represents multiple communities within the cannabis space.

High Times: What have long-distance running and cannabis done for your life?

Jerry Dunn: I drank for 25 years and was pretty much a functional alcoholic. I still had a real job, but was unfulfilled. Then I started doing all these crazy running things, which shifted my headspace. When I ran across the country the last time, I was out in the desert and I had this epiphany: running saved me from alcoholism. I realized it didn’t matter why I was pursuing all these running expeditions and marathons. I had this moment where I was like, ‘all you need to do, Jerry, is keep running.’

And I did. I got heavily involved in the running industry and created four running events in South Dakota: two marathons and two ultra marathons. So I took that message seriously and have pretty much not strayed from it. I built a life and a career around running. My life has gotten a lot better in the last 35 years since I stopped consuming alcohol and continue to use cannabis.

High Times: Getting a lot of physical activity is a great way for people to move through their addictions. Why do you think that is?

JD: I think it’s a couple of things. I think it brings discipline into your life because most addicts aren’t very disciplined. So if you commit to doing something three, four, five days a week, it brings that component of discipline into your sphere, and that translates into something you’re in charge of. Then there’s the physical part, which starts changing your body and mind. But I don’t think running is the only answer. There are other forms of exercise and activity that will help with the process of changing your lifestyle and habits.

High Times: Why did you choose running as your art?

JD: I often tell people that running is a childlike activity. When we were young and free and didn’t have the adult world to deal with, part of our play would be to run. Just run. And I think that our bodies when we start running kind of flip back or at least allow us to think about our youth, or kind of connect with that free childlike feeling. I like being in that spot. And I can only get there when I’m running. Plus, you’re also outside in nature and away from everything. That also plays into it for me.

High Times: How has cannabis played into that?

JD: I think cannabis enhances the ability to channel that childlike freedom. It’s a psychotropic plant and it does things to the brain and mind that takes you out of your default thinking pattern. It allows you to see possibilities and see things from a different perspective.

High Times: How has cannabis impacted your athletic career?

JD: It’s enhanced my ability to imagine things. For example, the idea to run across the United States may have come to me in one of those thoughtfully creative moments. Cannabis has given me the ability to take on and pursue goals that normally seem impossible. It’s allowed me to come up with ideas for marathons. It’s given me the ability to think beyond the bounds of tasks that seem impossible. I’ve been using cannabis for over 40 years. Learning to think creatively and allowing your imagination to flow is a byproduct, I think, of cannabis use. When you learn to think outside the box, it becomes habitually available. Cannabis opens the mind’s ability to do that. In order to ever really achieve anything, you have to be able to envision it first.

High Times: The stigma still very much exists for athletes and those who are involved in sports. Has it been hard for you to talk about using cannabis?

JD: I’ve actually only recently come out. I was what you call a ‘closet smoker’ because I didn’t think it was cool to talk about it. And on all these other runs and events I’ve done and hosted, including the run across the United States, I didn’t even think about talking about it. It just wasn’t acceptable. But it’s easier now that things are different in culture and society.

I went to the US Trail Running Conference, and while at lunch talking to people the topic of cannabis came up and I mentioned that I wanted to do another transcontinental run to raise awareness around the benefits of cannabis and disprove the stigma. A man who works for one of the major companies in the running industry was also at the table. He’s also a lifelong runner and has participated in a few 100-mile events. He said it’s not uncommon for him at 70-miles to sit down and use some cannabis because he’s hurting and sore. It relieves some of the mental stress and physical pain.

Just being able to have that conversation was amazing. It wouldn’t have happened even three years ago. I know I’m going to get flack from some people in the running industry that are opposed to this. But I don’t care. I think everybody should have access to cannabis for a variety of reasons.

High Times: Part of what makes you so interesting is that you don’t just appeal to professional athletes. You also appeal to baby boomers and veterans. Can you go into that a bit?

JD: My target markets for what I’m doing is my generation: boomers and veterans. There’s a study that’s ongoing at the University of Colorado, and the premise of the study is about who the new cannabis users are since legalization– and the answer is Baby Boomers. We’re the largest, growing demographic of cannabis users in the U.S.

I can speak authoritatively about living through the Reefer Madness era and Nancy Reagan’s ‘Just Say No’ war. Baby boomers aren’t using cannabis to get high. They’re using it to find relief from Alzheimer’s, arthritis pain, and so much more. More people 50-years-old and wiser need to use cannabis instead of the heavy, dangerous pharmaceuticals doctors prescribe.

High Times: And you are a veteran?

JD: Yes. And cannabis is one of the best medications for PTSD. I live three blocks from the VA Hospital in South Dakota, which was built in the early part of the 20th century. And it was designed specifically to deal with the mental issues of returning vets. South Dakota is not a legal state, mind you. Veterans go into an eight-week program, they get clean and sober, and they come back into the real world. And the majority of them relapse and go back to using whatever substances they got addicted to deal with their PTSD. Why? Because at all of the 171 medical centers; 700 outpatient, community, and outreach clinics; 126 nursing home care units; and 35 domiciliaries, they are never given the opportunity to see if medicinal marijuana will be effective in treating their problems. Our federal laws don’t allow it. So is it the “best care available?” I don’t think so.

We veterans were told we would be taken care of if we gave service to our country But that has never been the case. Besides the boomers and the old people needing to know that it’s okay to feel better through cannabis, we need to take car better care of our veterans than what we’re currently doing. Especially where I’m from, I don’t think many veterans even know that cannabis can be used in a way that’s more than just getting high. I don’t think they understand cannabis can be used medicinally and therapeutically. My mission is to provide some inspiration to lead a more active lifestyle and to educate people about the use of marijuana in the 21st century.