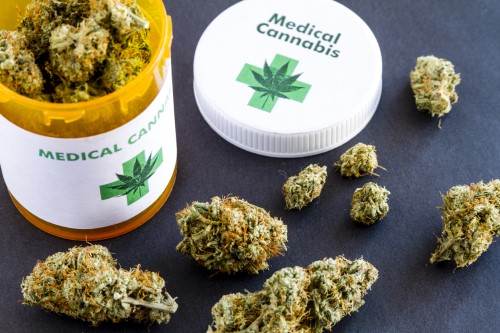 Bobbi Assoun, 47, has a doctor’s prescription and is federally licensed to use marijuana for MS-related pain. As a recipient of benefits through the Ontario Disability Support Program, her drug costs would normally be covered by the Ontario Drug Benefit program, but that program doesn’t include medical cannabis.

“There’s only one thing that it will mean, which is that I’ll be going back and using my Dilaudid,” said Assoun, referring to the opioid also known as hydromorphone.

Bobbi Assoun says using medical cannabis has allowed her to stop using other drugs, including the opiate hydromorphone. However, because the Ontario Disability Support Program won’t cover the cost, she worries she’ll have to go back to opiates and fears becoming addicted.

Unlike medical marijuana, that drug is covered by the province for people living on ODSP.

Assoun has been paying out of pocket, but said a financial setback has recently made that impossible. Her monthly ODSP benefit of approximately $1,800 a month was cut by about $400 because her 17-year-old daughter moved out.

As a result, Assoun said she’s about to be made homeless because she can’t cover the rent, never mind pay $100 a month for medical marijuana. 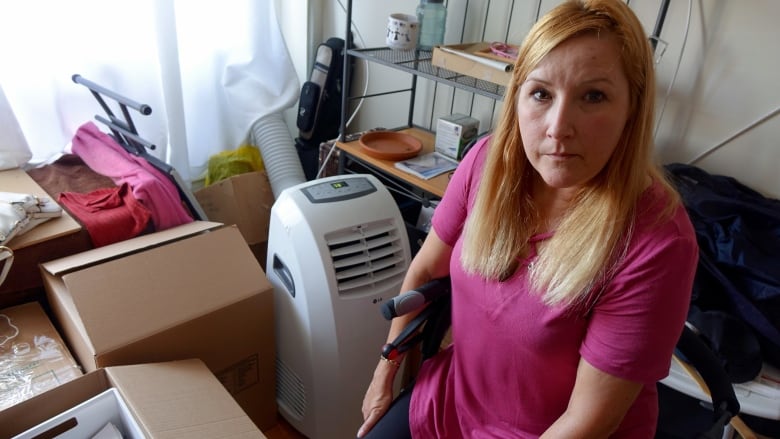 Bobbi Assoun, who relies on payments from the Ontario Disability Support Program, can’t afford medical marijuana to treat her MS symptoms and wants the province to cover the cost. (Susan Burgess/CBC)

However, the opioid option doesn’t sit well with Assoun. When she used those drugs more regularly, she said she restricted her intake for fear of becoming addicted, with the result that she lived with much more pain.

“I look at all the medications I’ve taken over the years, and they don’t help like medical marijuana has done for me,” Assoun said. “I find that it would just be like a wave, and the pain would just go away.”

The Ontario Drug Benefit lists more than 4,000 drugs eligible for coverage with a prescription.

Asked why medical marijuana is not among them, a spokesperson for Ontario’s Ministry of Health pointed to the federal government, saying Health Canada had not approved it as a therapeutic product under the Food and Drugs Act. 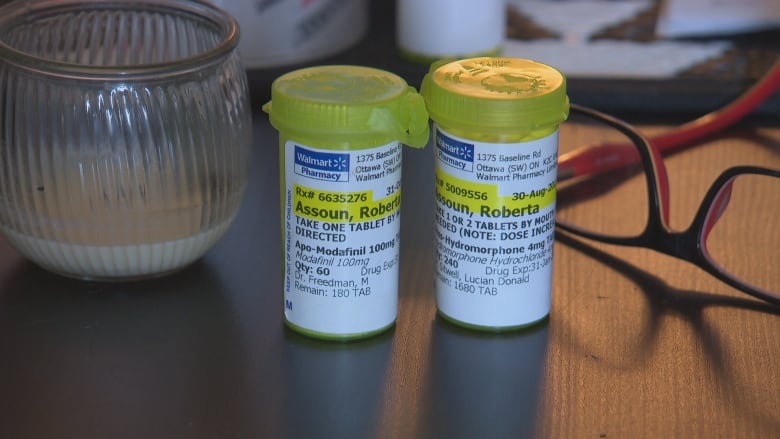 Bobbi Assoun says using medical marijuana has allowed her to stop using other drugs, including the opiate hydromorphone. However, because the Ontario Disability Support Program won’t cover the cost, she worries she’ll have to go back to opiates and fears becoming addicted.

For a drug to be approved and marketed in Canada, drug manufacturers must first provide Health Canada with detailed information including results of pre-clinical and clinical studies, so the department can assess the potential benefits and risks of the drug.

The federal government’s regime for regulating access to cannabis for medical purposes — which was developed following a ruling by the Supreme Court of Canada — is separate from that drug approval process.

Sativex is used to treat a particular type of pain related to multiple sclerosis. Assoun said she hadn’t heard of it and that it hadn’t been prescribed to her. 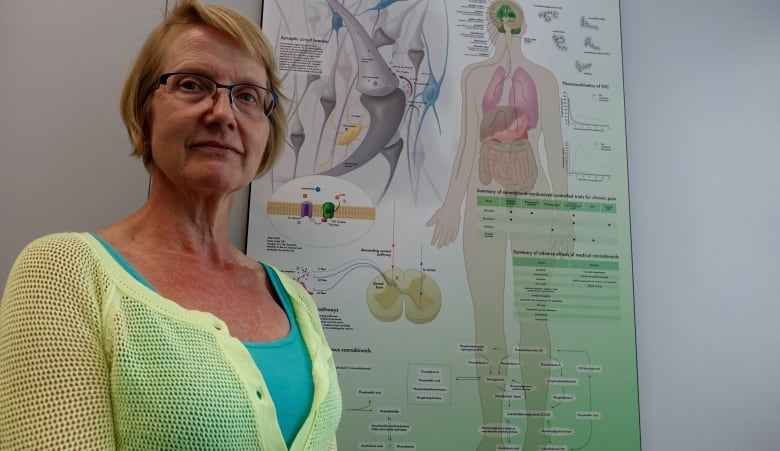 Barbara Mainville, a former emergency room doctor and coroner who now sees patients at Canabo Medical Clinic, says it makes no sense for the Ontario government to cover the cost of prescription opiates but not medical marijuana.

An Ottawa doctor is encouraging public and private providers of drug coverage to embrace cannabis despite the lack of federal approvals.

“Cannabis is so helpful for so many patients,” said Barbara Mainville, who sees patients by referral at Canabo Medical Clinic after a thirty-year career as an emergency room doctor and a coroner. “It’s also cost-effective.”

While other doctors remain leery of medical cannabis Mainville has shed her skepticism. Having seen patients get off ODSP and go back to work with the help of medical marijuana, she said stories like Assoun’s make her cringe.

The benefits of marijuana to MS sufferers are well documented, she said, as are the risks of opioids.

“One of the principles I work on is ‘if what you’re doing isn’t working, you should do something else,'” Mainville said.

“Opiates are killing people right, left and centre, and I think that counts as not working.”

Mainville said she’s comfortable recommending marijuana because of its long history of cultivation and use by humans. 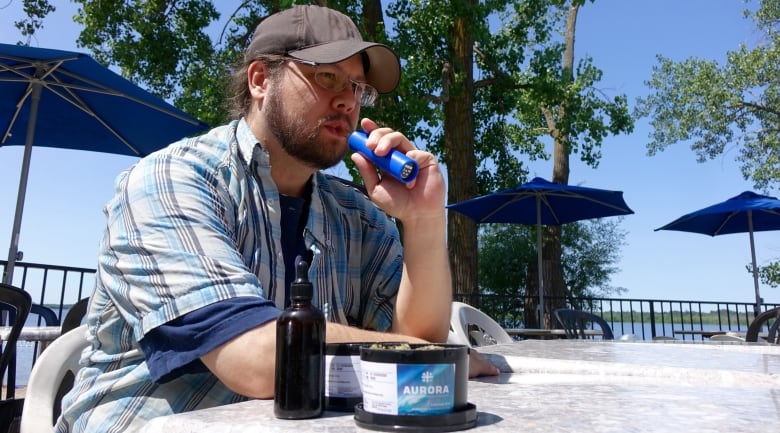 Shaun Gricken uses medical marijuana to treat severe anxiety. He says he tried dozens of other drugs that didn’t work before finding relief with this one, but he’s forced to pay for it himself because it’s not funded by the province for recipients of the Ontario Disability Support Program.

Marijuana also has tremendous potential for the treatment of anxiety and PTSD, Mainville said, but people suffering from those conditions are also barred from coverage through ODSP.

Shaun Gricken said he tried dozens of other medications before finding relief for his anxiety with medical marijuana.

“Before it, I was pretty much literally a shut-in,” Gricken said.

Gricken said he was “shocked” to discover ODSP wouldn’t cover the cost the drug after the many other medications he tried previously but found ineffective.

“The fact that they’ll cover those and opiates out the wazoo, and not cover this, it’s ridiculous,” Gricken said.

Gricken uses an extract called cannabidiol oil along with dried cannabis flower in a vaporizer, for which he pays about $350 a month to a licensed producer. 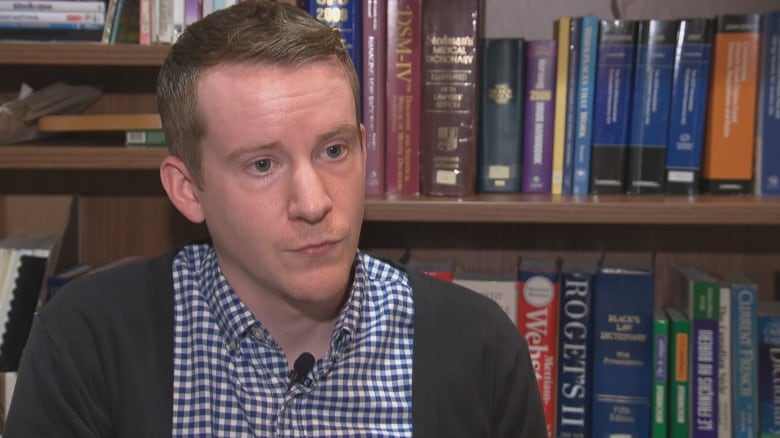 Nick Churchman, a staff lawyer with Community Legal Services of Ottawa, is hearing regularly from clients of the Ontario Disability Support Program who have been denied coverage for medical marijuana.

Gricken is one of several people who have contacted Community Legal Services of Ottawa looking for help.

For now, the legal clinic is encouraging clients to apply to the Ministry of Health’s Exceptional Access Program, which can grant access to drugs not normally included in the public plan.

However, Churchman said he wasn’t aware of anyone getting coverage that way, and a spokesman for Ontario’s Ministry of Health confirmed in an email that it had not approved any such applications.

Churchman pointed out that unlike his clients, military veterans are covered for the drug through a public program. Veterans Affairs Canada has approved it based on anecdotal evidence from clients that it’s helpful, he said.

“For ODSP recipients who are using medical marijuana, they would also like their stories to be heard,” Churchman said.

For all your medical cannabis needs, please visit Herb Approach. A Premium Online Dispensary in Canada.