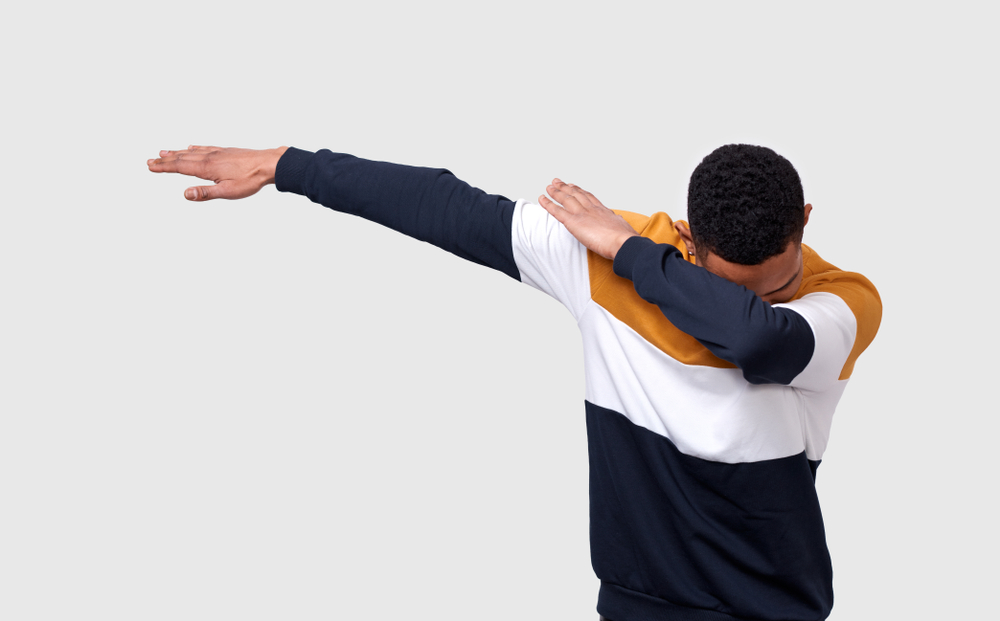 Dabs, dabbing, and “hitting the dab” are all popular expressions that have entered into our cultural zeitgeist, but beyond a catchy (or obnoxious) dance move, what does the term have to do with cannabis concentrates?

Many will have various interpretations of what the term might mean or where it originated from, but the truth is the words dab, dabs, and dabbing were originally used to describe the literal “dabbing” of weed concentrates in order to vaporize them!

Since dabs are usually unbeleivably harsh on smokers who are unaccustomed to the practice, many end up coughing up an unbelievable storm that’ll leave them hacking away for miniutes. To mitigate the human-made aerosol spray that might accompany such vigiorous coughing, many will cough into their elbows and thus – the dab was born.

But beyond the dance move and its origins, what is a dab? What kinds of dabs are available out there and how can you start dabbing?

Let’s break it down so your first time dabbing is as pain-free as possible!

Compared to smoking a joint or hitting a bong, dabbing is a relatively new phenomenon.

You might already be familiar with hash oil concentrates such as shatter, wax, live resin, and crumble. In the world of weed concentartes, these potent and tasty products are all universally recognized as “dabs.” Dabs are typically consumed with either a dab pen, or a dab rig.

Dab rigs usually come in a familiar, bong-like shape but can also take the appearance of a straw, a water pipe, or any shape that glass blowers can come up with. In many ways, dabbing is very similar to taking a hit off a bong, as the practice is relatively the same.

When you use a dab rig or similar device to vaporize and consume concentrates, you’re dabbing. The terminology really is as simple as that!

For a Complete How-to Guide on How to Hit The Dabs, Check Out Our Guide Here!

You typically use what’s known as a “dabber” to scrape and apply the concentrates onto a dab nail which is superheated to instantly vaporize the dab into vapour to be consumed.

Why the overlap between all of these different terms? Despite creative strain names that many cannabis varieties enjoy, the chronic can sometimes muddy things up. Dab, dabbing, and dabs are now collectively recognized as both the practice of taking ” a dab,” and the cannabis concentrates themselves.

Variety is the name of the game when it comes to dabs. In addition to flavour, THC potency, and texture, you can even have your pick of solvent or solventless. If you’re not a discerning cannabis user, then these differences won’t matter too much, but for those who like chasing big terps, big potency, and big experiences, here’s how the different types of dabs differ from each other.

Probably one of the most popular, well-known cannabis concentartes available in the THC cannabis space today, shatter is synonymous with the dabs. Learning how to use shatter is easy, delicious, and most of all – potent.

Instantly recognizable by its beautiful amber colour and pull-and-snap consistency, shatter has been a mainstay in the cannabis community for decades. Boasting incredibly flavour and an equally impressive appearance, there’s a reason why this THC concentrate has been the go-to choice of dabbers for decades.

Want to Learn More About What Shatter is? Check Out Our Full Guide Here!

Unfortunately, the process also strips away many of the plant’s tasty terpenes and other benefiical elements, which si what led to the rise of other, solventless options.

While the name might conjure up images of an undead variety of THC concentrates, we can assure you that this isn’t the case!

In fact, the name is actually used to describe a unique breed of cannabis concentrate that’s made through flash-freezing weed at the point of harvest. This special process preserves the cannabis plant’s unique blend of terpenes (flavour compounds), making for an experience that comes as close as possible to tasting like “fresh” cannabis.

While this variety of THC conentrate might not be as potent as your run-of-the mill shatter, many tokers enjoy it for its unique, one-of-a-kind flavour profile and the full-spectrum experience it can provide.

Another cannabis concentrate that’s uniquely solvent-free, rosin is a type of dab that’s made through nothing more than heat, pressure, and qualtiy cannabis!

To make rosin, freshly cured cananbis flower is placed between 2 heated plates and are so slowly pressed to extract all of the plant’s deliciously potent compounds.

The best part of all? You can do this at home with a DIY Rosin Press!

If you don’t want to get your hands dirty, you can also easily find this concentrate at most trusted dispensaries.

Distillate is likely the most consumed cannabis concentrate on the market today. It’s a dab concentrate that appraoches a whopping 80-90% THC!

The process for making this kind high impact dab involves stripping away all of the plant’s fats, lipids, and waxes to leave behind a thick, viscous liquid of pure, unadulterated THC.

As you might expect, this concentrate packs a mightily high punch. While you can engage in smoking it through a joint, it’s more commonly consumed as a dab, or through a vape pen or vaporizer.

Dabs – The Final Hit on Dabbing

If you consider yourself a cannabis conniseur, or if regular joints and pipe hits are no longer doing it, you should definetely consider dabbling in, well, dabbing!

With so many varieties of dabs available, there’s a dab out there that’s sure to fit your unique tastes and preferences, whether that be taste, texture, or experience.