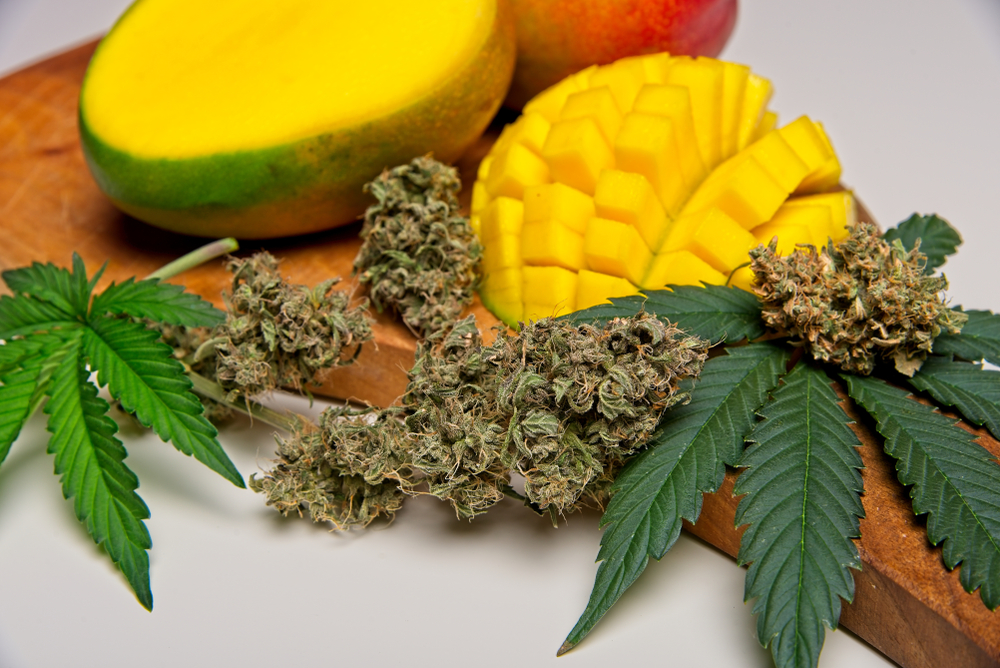 Suppose you’ve been looking to enhance the high you get from cannabis. In that case, you might have heard a few suggestions – exercising before (or after) smoking, adding a few ice cubes to your bong or smoking on an empty stomach – but as it turns out, mixing mango and weed might get you higher than all of these combined.

Many of these theories may have an element of truth to them, but the one that had us most curious was this: does eating fresh mango and smoking weed together result in a better cannabis high?

As it turns out, vetting the “mango + weed” theory is complicated. Read on to find out what we learned!

Does Mango and Weed Actually Make You Higher? How Does it Work?

Could it really be this easy? Can these delicious fruits increase or enhance your high? Is the key to a great cannabis high really just a tropical fruit at your local grocery store away?

The answer to this comes in two parts: the scientific evidence and the anecdotal evidence.

The scientific side of this story boils down to two elements; the terpene myrcene and THC.

Mangoes contain myrcene, a type of aromatic compound known as a terpene. Terpenes contribute to the aroma and flavour for various plants and vegetables, including cannabis, and it gives it a unique smell and a distinct earthy aroma.

Some cannabis strains contain higher myrcene levels than others, with myrcene being the most abundant terpene in that strain’s terpene profile.

Additionally, myrcene has a significant analgesic effect (painkilling) blocked by naloxone, which suggests it may act as an opioid. It’s also found in other plants that cause sedation, such as hops and lemon grass, and “Myrcia sphaerocarpa, a medicinal shrub from Brazil traditionally used to treat diabetes, diarrhea, dysentery, and hypertension.”

Scientists also argue that the presence of terpenes largely controls the cannabis experience. This effect, known as the entourage effect, suggests that when cannabinoids and terpenes interact, they can act with greater intensity to deliver a more potent effect.

So at a glance, the rumour makes sense.

But it’s actually more nuanced than that.

Research across the scientific community suggests that myrcene makes it easier for both the myrcene itself and THC (Tetrahydrocannabinol) in marijuana to be absorbed.

This is accomplished by lowering the threshold for crossing the blood-brain barrier. If this is true, the sedative effect wouldn’t just be the cumulative effects of the myrcene from eating mangoes and the myrcene in the cannabis plant.

This would mean that consuming mangoes actually makes the THC in cannabis work better due to the synergy between the two.

Indeed, studies show that these interactions “could produce synergy with respect to the treatment of pain, inflammation, depression, anxiety, addiction, epilepsy, cancer, and fungal and bacterial infections.”

Remember the entourage effect we spoke about earlier? This is basically confirmation that it’s affecting your weed experience.

So the science certainly doesn’t refute the theory, and it appears that mangoes and cannabis could provide health benefits.

Or, as one study put it, “although the mechanism of function of myrcene is not fully understood yet, it is evident its promising role in the treatment of inflammation and pain.”

That is to say: these studies hypothesize how myrcene and THC could work well together. It certainly plays a role in reducing inflammation.

Yet the question remains: will consuming mangoes and consuming cannabis actually get you extra high?

In other words, where’s the rock-solid data on getting stoned?

Type “do mangoes and weed make you higher” in your favourite search engine, and you’ll be met with a frustrating lack of hard evidence around actually getting higher.

Plenty of articles pose the question without really answering it, or they focus on other benefits of eating mangoes that have nothing to do with how it plays into your high.

Others offer the science that suggests what could mean a better high but offers no data showing that it actually enhances your marijuana high.

But there’s an anecdotal side of the story too.

Countless cannabis users have tested this theory, and one shouldn’t discount their collective experience due to a lack of a scientific approach. The experience of the average cannabis user matters, and it can tell us a lot about mango and weed.

And luckily, you can find anecdotal evidence in the same place you can get a group opinion on pretty much any topic: Reddit.

One Reddit post from a few years ago posed the question for users on r/trees (the most popular marijuana group on Reddit). It asked users to upvote the post if they had experienced an enhanced high when they eat mangoes and smoke cannabis. They were also instructed to downvote if they disagreed.

The result? 86% of the marijuana enthusiasts who responded to the post agreed that eating mango and consuming marijuana produced an enhanced high, with a whopping 250 users agreeing.

Other Reddit users reported “smoother” highs and even “tripping” to the point of hallucinations. All of these were regular marijuana users who made one change: eating mangoes before getting high.

While this is purely anecdotal and could be influenced by the placebo effect, 86% seems pretty high for a completely false assertion. This is especially true given the responders: self-identified marijuana enthusiasts, who presumably know their own tolerance and the expected effects from different strains of marijuana.

In summary, both the scientific evidence and the reports of 250+ cannabis users agree: mangoes can indeed enhance your high.

And, as one Reddit user put it, “even if they don’t, why wouldn’t you want to eat a mango?”

If all else fails, eat mangoes because they’re delicious and full of essential vitamins, and cannabis makes delicious things even more delicious.

Plus, the science indicates that myrcene has lots of health benefits, so it’s really a win on all fronts. Given the different amounts of myrcene in different strains of weed, you can experiment to find the perfect combination of weed strain and mangoes to ease anxiety, treat chronic pain, or just go on a crazy trip.

Mango and Weed – A Match Made in Heaven?

So there you have it! Mangoes and cannabis do work together to produce a better high, and they may have additional benefits as well.

But here’s the thing: we need your help. We know people are going to want to see hard data, and we need you to help strengthen our hypothesis. So here’s a general rule of thumb to follow if you want to get higher off mangos.

Do it for science!