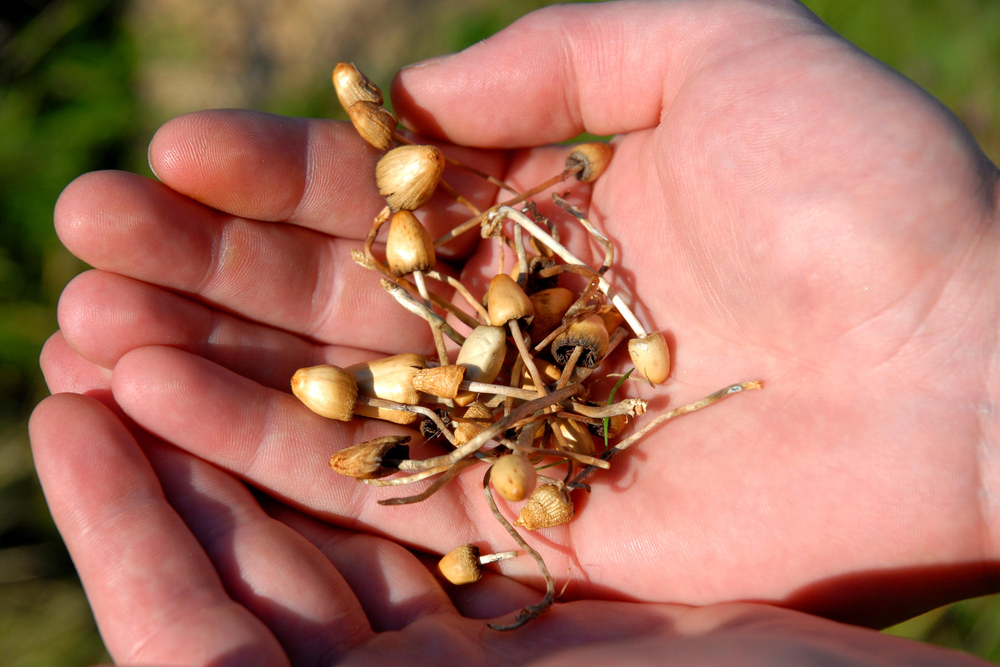 Shrooms, also known as magic mushrooms, have garnered a considerable amount of interest.

From the Liberty Cap to the Golden Top — magic mushrooms can be found almost anywhere in the world. Prized for their psychedelic effects and medicinal potential in treating depression and other mental health conditions, both the public and scientific community have a renewed interest in the power of magical mushrooms; more commonly referred to as shrooms.

These little fungi’s (pun intended) have a very strong impact on the body, and when taken in volume, it could lead to a bad “trip.” That said, those who’ve had a successful experience with the drug describe an intense outpouring of amazing thoughts and vivid imagery that circulate their consciousness.

Despite how you feel about hallucinogenic shrooms, we wanted to provide a reference to give you all the information you’ll need about them, and how to safely dose them.

What are Magic Mushrooms?

Magic mushrooms can be either wild or cultivated, and contain a naturally-occurring hallucinogenic and psychoactive compound known as psilocybin; which is one of, if not the most well-known psychedelics. Classified as a Schedule I drug in the United States, a Schedule III in Canada (high risk for misuse) and a strong hallucinogen, it currently has no accepted medical uses in the United States, however, some cultures are known to use mushrooms for centuries.

Western audiences, such as Gwyneth Paltrow’s personal staffers, have used psychedelic mushrooms to go on spiritual retreats. Their objectives ranged from self-exploratory to improving mental health, with some simply wanting to just feel more creative.

They are prepared by being dried out, then eaten by themselves, or being mixed with food or drink. Magic mushrooms are known by many names including shrooms, blue meanies, mushies, golden tops, agaric, liberty caps, philosophers stones, and amani.

The term itself is a generic one that is referencing any type of fungi that contains the chemical compound psilocybin, that when it gets digested into psilocin — it produces an altered state of consciousness and psychedelic experiences.

What are the Effects of Shrooms?

Considering the fact that shrooms are a hallucinogenic drug, it can cause you to see, feel, and hear things that seem real, but aren’t. The overall effects of mushrooms will vary depending on several factors, but it’s believed one of the biggest impacts is one’s environment and headspace.

They have a long history of being associated with self-discovery and spiritual experiences— leaving many to believe that naturally occurring drugs like weed and mushrooms are sacred; enabling people to attain a high sense of spirituality.

Some take mushrooms so they can feel a superior sense of connection, euphoria, and a disconnect with time. It does this by influencing serotonin levels and takes about 20 to 40 minutes to kick in, and the trip can last up to 6 hours.

Several factors should be taken into consideration that determine the effects including age, weight, dosage, emotional state, personality, and environment.

Now we know the compounds in mushrooms give users a feeling that is mind-melting, but according to research, it does the opposite; it technically boosts the connectivity in the brain. 15 volunteers were asked to undergo brain scans using an fMRI machine after ingesting a dose of mushrooms, and after taking a placebo.

The brain scans showed that under the influence, the brain synchronized activity in areas that aren’t usually connected.

Like anything in life, we have to take the good with the bad.

Shrooms are known to cause yawning, drowsiness, yawning, feelings of euphoria, nervousness, paranoia, hallucinations, and psychosis.

As you can see, hallucinogens carry the risk of triggering emotional or mental issues or influencing accidents while under the influence. The actual amount of psilocybin in any variety of magic mushrooms or shrooms is unknown, with many of them varying greatly in their psychoactive constitution, which makes it near impossible to determine the length and intensity of a trip.

With so many varieties of shrooms and magic mushrooms available out there, the “strain” itself can have a wide variety of effects. Some can be more mild and introspective while others shrooms could have the potential to take you for a wild ride if you’re not well prepared!

Popular strains of mushrooms can include Mexican Cubensis, Golden Teachers, and Mazatapec Mushrooms. No matter the strain, these psychedelic mushrooms all have the following effects:

How to Dose Shrooms

Before we begin with how to take shrooms, we need to preface that no drug use is 100% safe, and this article was created to reduce harm. That said, magic mushrooms are illegal in most countries, and if you choose to use shrooms or buy shrooms Canada, please use caution.

There is no set dose in terms of mg, it is determined by weight in grams. It’s important to note that different strains have varying levels of psilocybin, and each mushroom will have different amounts in it. This is why it’s strongly recommended to start small and go slow.

You’re most likely to have a good experience in a clinical setting with low doses, in fact, studies have found that users who take small doses are more likely to see long-lasting changes in behavior and attitude compared to users that started with high doses.

For beginners, we recommend starting with 0.8 grams

For intermediate users, we recommend 1.6 grams to 3.2 grams

For experienced users, we advise you to stick to a maximum of 4.8 grams.

It may be wise to start with a dose lower than 50% of what you normally take if you’re new to a certain strain, or one you don’t know the potency of as different strains have different potencies. Although weight can impact how much you should take, it doesn’t vary by much.

Not too keen on the taste of dried mushrooms or just unsure of how much to dose? Luckily, there’s an option for you. Just like cannabis, shrooms can also be taken in a more palatable, tastier edible form.

With shroom edibles such as chocolate bars, teas and even jellies being made available, procuring, dosing and consuming magic mushrooms has never been easier or safer. Edibles make the dosing process much simpler as they’re specific about how much psilocybin is actually in each product ensuring that you get the experience that you’re looking for each and every time.

Shrooms edibles could provide a better and more palatable experience than eating dried mushrooms themselves. Shop our full selection here!

Of course, proper dosing guidelines still apply. If you’re a beginner, practice safe dosing by starting small – less than a gram to a gram and slowly move your way up. Magic mushrooms can last as long as a cannabis edible with much more harrowing results so it’s best to not overdo it.

Have Some Mushroom Tea

Many first time users of magic mushrooms, including ourselves, find that the taste can be extremely off-putting and intense if you just eat the shrooms ‘as is.’

Eating them quote on quote “raw” can also result in some more intense than usual nausea because of the strong flavours and aromas that’ll be hitting you for the first time.

To make the experience more palatable (and enjoyable), we recommend brewing a cup of mushroom tea. Shroom tea allows you to enjoy shrooms in an easy-to-digest way, and can actually reduce nausea, discomfort, and some of the more uncomfortable effects from the shroom’s onset.

For step by step instructions on how to brew mushroom tea, be sure to check out our guide!

If you’re a first timer to mushrooms, weed, or both, using both of these substances at the same time is a recipe for disaster. The intense psychedelic experience from shrooms can be disorienting – throwing weed into the mix will serve to make this experience even more uncomfortable.

Some psychonauts will argue that consuming a sativa strain will help to deal with some of the nausea and anxiety that usually accompanies the shrooms’ come-up.

Smoking weed on mushrooms can definitely help with some of the negative side effects of shrooms, but only if you’re experienced with using both substances.

If you’re new to either substance, it’s heavily advised that you DON’T MIX the 2 together. Once you’re more comfortable with the experience, you could dabble in experimenting with combining the 2 together, but until then, it’s best to keep it vanilla.

Smoking Weed on Mushrooms – What You Need to Know

Magic mushrooms aka shrooms have a long history of use and with that, a lot of documented experiences — good and bad. The potential therapeutic benefits that are currently being studied by the scientific and medicinal communities are worth noting, and the recreational and spiritual aspects of it are worthy of respect.

This includes using it with caution and using it wisely. Preferably in a peaceful environment with a few close friends, you can trust to guide you and make sure you’re safe.

Want to try some magic mushrooms out for yourself? From dried shrooms to magic mushroom tea and chocolate shroom edibles, Herb Approach has it all. Sign up today for $25 off your first order!