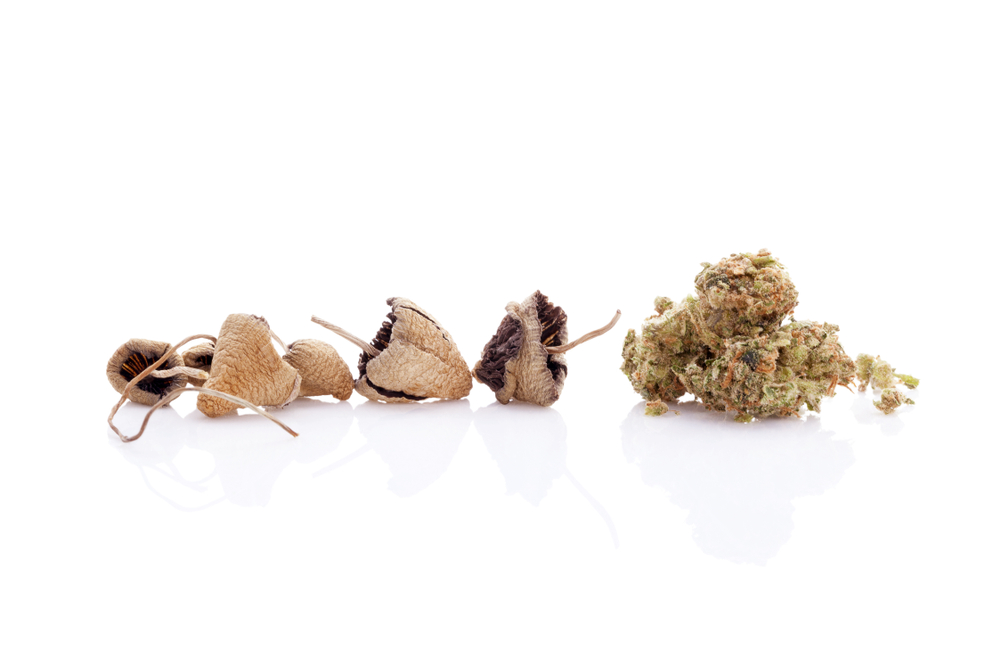 You’re in a forest, you have your friends surrounding you and you’re enjoying the trip but then – someone offers you a joint – smoking weed on mushrooms, is that something you really want to do?

Whether it’s magic mushrooms, LSD or a similarly psychoactive substance, it’s not too uncommon to be hitting the reefer while you’re on a trip. However, just because you can doesn’t necessarily mean you should.

The shrooms trip experience can be intense and disorienting for many, especially if you’re new to the world of psychedelics. Nausea, dizziness and fatigue are all common side effects of consuming mushrooms and could entice you to smoke up while you’re on your trip but unless you’re ready for what could possibly come as a result, you should steer clear.

Here’s what happens when you try smoking weed on mushrooms.

Smoking Weed on Mushrooms – How Does it Work?

For many smokers, the nausea, dizziness and fatigue described above are what lure many to try smoking weed while on a magic mushrooms trip. If you’ve ever been on a shrooms trip yourself, you’ll be able to relate to the, at times, intense nausea and disorientation that can come a few minutes after consumption.

While smoking a joint can definitely serve to alleviate some of these symptoms, the undesirable (or desirable, depending on who you speak to) side effects could not just ruin your trip, it might make you swear off of mushrooms for the rest of your life.

What are some of these side effects? Is smoking weed on shrooms a good idea?

Mushrooms contain psilocybin, the compound responsible for the psychedelic effect that mushrooms deliver. Once magic mushrooms are ingested, this compound is broken down into psilocin and acts upon the serotonin receptors in our brain, providing the mind-altering effects that many psychonauts desire.

On the body, shrooms provide a pleasant, relaxing sensation that spreads throughout while also opening our eyes to strange new visual patterns. Ideas and thoughts that otherwise might have been irrational or implausible suddenly become completely logical.

New connections, ideas and thought patterns may emerge and sometimes, the culmination of these experiences may even lead to a quasi-spiritual experience that leaves the user feeling refreshed and enlightened.

Weed, on the other hand, acts upon our endocannabinoid system, also known as our ECS. Endocannabinoid receptors are located throughout our body (peripheral) and central (brain) nervous systems. The levels of endocannabinoids in our system affect everything from appetite to pain and diet to energy.

That’s why we might get the munchies or couch-lock after ingesting a THC heavy strain – the sudden influx of cannabinoids is affecting our ECS to a degree where we can feel the effects directly.

Luckily, these 2 systems and pathways don’t interact with each other (for the most part) but that doesn’t mean that there aren’t any consequences to consuming both at the same time. Here’s what you can expect from smoking weed on shrooms.

Weed and Shrooms – What to Expect

While both weed and magic mushrooms are natural substances, mixing the 2 together is generally a bad idea, especially if you’re new to either of the 2 drugs.

We’re all familiar with how weed can make us feel. It doesn’t matter if it’s an indica vs sativa, cannabis will generally take us to an altered state of mind where colors might be brighter, thoughts a bit more absurd and emotions a bit more high.

If you’re an experienced user that knows their limit, then you’ll also be able to recognize the more unsavory side effects of weed if you’ve either smoked too much or smoked for the first time.

Intense paranoia, unsettling anxiety and nausea like you’ve never felt before are all things that any toker worth their salt have experienced at least once or twice in their smoking career.

These effects, paired with the at times scary and inescapable anxiety that couples the introspection that magic mushrooms provide can make for a decidedly bad experience.

However, not all who have tried smoking weed on shrooms report the same results.

Many tokers and psychonauts have reported that smoking strains known to reduce anxiety and nausea have helped them deal with the negative side effects of magic mushrooms on the initial come up of the trip.

Additionally, some users (like myself) have also found that smoking weed while on a trip can actually “ground” them to reality and be more open towards the psychedelic experience.

On the other hand, others have reported that smoking weed on mushrooms intensified the trip to an extent where it was difficult to discern reality from the psychedelic and inhibited their ability to think rationally.

Since psychedelics are such a personal, subjective experience, it’s difficult to paint with broad strokes the effects that combining the two would have on you. Generally speaking, here’s what one can expect from smoking weed on mushrooms:

And here are some of the risks that could accompany the combination:

Should You Smoke Weed on Mushrooms?

Whether or not you should smoke weed on mushrooms is hard to say. If you’re an experienced psychonaut who is also plenty experienced with smoking weed and you’re looking to reduce some of the negative side effects of magic mushrooms then we say you should definitely try it.

Conversely, if you’re new to magic mushrooms, weed or both, then we highly advise you don’t. Magic mushrooms can be an intense, harrowing experience for the uninitiated and smoking weed when you’ve never had it before while on mushrooms can only make a bad situation worse.

If you are interested in smoking weed while on mushrooms, we recommend that you get your feet wet first with a more easily dosed mushroom edible or mushroom tea before embarking on your journey.

While dried mushrooms are effective, they can be difficult to dose and the actual amount of psilocybin that you’re ingesting could be more or less of what you actually want.

To sum it up – if you’re experienced in both substances, you should try smoking weed on mushrooms. If you’re not, then we definitely don’t recommend it.

We hope this writeup has helped shed some light on the do’s-and-don’ts of smoking weed while on shrooms! As always – enjoy responsibly.