If you find cannabis’ different aromas as enjoyable as the experience it creates, then it’s time to ask, what are terpenes, exactly?

Here, we’ll break down what causes each cannabis strain’s unique scent along with how they each affect our individual experiences. Let’s get started.

Related: What is THCA: How to Consume it, It’s Benefits and More

What are Cannabis Terpenes?

A terpene is a type of organic molecule called a hydrocarbon (hydrogen + carbon). Marijuana terpenes make up the majority of the essential oils found in many plants such as Conifers (aka Pines).

Cannabis plants aren’t alone in having them as many different plant and insect species produce terpenes as a defence mechanism to protect themselves from predation by animals, other insects, and bacterial and fungal infections. But in the case of humans, cannabis terpenes tend to have the opposite effect.

Note: Terpenes should not be confused with terpenoids. Terpenoids have a more complex molecular structure than terpenes do since they commonly contain oxygen, hydrogen and carbon atoms.

Terpenes and Trichomes: What’s the Difference?

Another word that’s familiar with cannabis culture is “trichome”. Trichomes are the hair-like bulges that you see on both the buds and the leaves of all cannabis plants. Trichomes are responsible for the plant’s crystalline appearance.

Interestingly, like terpenes, the purpose of trichomes is to protect plants from a wide range of harms like ultraviolet light, transpiration and freeze intolerance.

If you’re wondering why this is important to cannabis users, it’s because trichomes are responsible for the production of essential oils that contain both THC, CBD and many other cannabinoids. 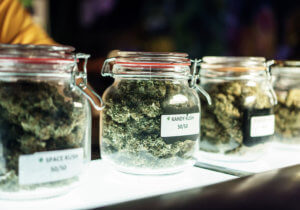 Similar to cannabinoids, there are over 100 different known terpenes found in cannabis plants, and while the differences are often subtle, scientists have made considerable progress classifying the different types and their effects.

For instance, terpenes are first divided into 4 main categories consisting of sweet, sour, spicy and bitter. Then, after that, they’re subdivided into other categories such as fruity, flowery, citrus, dairy, warm, sharp, vegetal and nutty.

So, a cannabis strain with a “sour” smell such as Lemon Skunk or Lemon Haze may have a strong lemon scent. This sour smell usually indicates a Sativa strain that provides consumers with an energetic euphoria.

By becoming familiar with the different types of aromas, consumers’ experiences can often be tailored to their liking.

In fact, now that consumers are becoming more aware of the effects that different types of terpenes have, they’re also becoming aware that terms such as Sativa, Indica and Hybrid have very little to do with genetics and a strain’s psychoactive effects.

Instead, consumers are now turning their attention to marijuana terpenes as well as rare cannabinoids such as CBG, CBC, THCV as indicators to how a particular strain may affect them.

How Terpenes Affect Your Cannabis Experience

For instance, Myrcene is the most common terpene found in cannabis and is often referred to as the “couch-lock” terpene due to its sedative effects.

Limonene and Pinene, on the other hand, produce a euphoric and highly energetic effect. In fact, Limonene works exceptionally well as a mood-lifter, while Pinene has neuroprotective benefits that may aid in preventing short-term memory loss caused by THC.

Related: What is THCV: Where to Find it, Benefits, Consumption Guidelines and More

However, some users may find that Limonene and Pinene dampen mental and physical energy and thus, is not the best choice for pain and anxiety relief.

Furthermore, Terpinolene (which stands out for its unique herbal, woody and gasoline flavour) can affect different users in different ways. For instance, for some, it has energizing and creative effects while, for others, it behaves more like myrcene by inducing a calm, relaxed state.

So, now that you’re aware of how terpenes combine with cannabinoids such as THC and CBD to produce different psychoactive effects, you’ll have a far greater understanding of how to choose particular strains that you’ll find most enjoyable.

The next time that you visit your favourite online dispensary, rather than asking the budtender for an Indica or Sativa dominant strain, you should instead focus on the aroma and let your nose guide your decision.

Chances are if a particular strain appeals to your sense of smell, then it also may provide an appealing experience. Once you’ve gained experience with associating general scents with the effects that you find pleasant, then you can progress to learning to associate the more subtle aromas with more subtle effects.