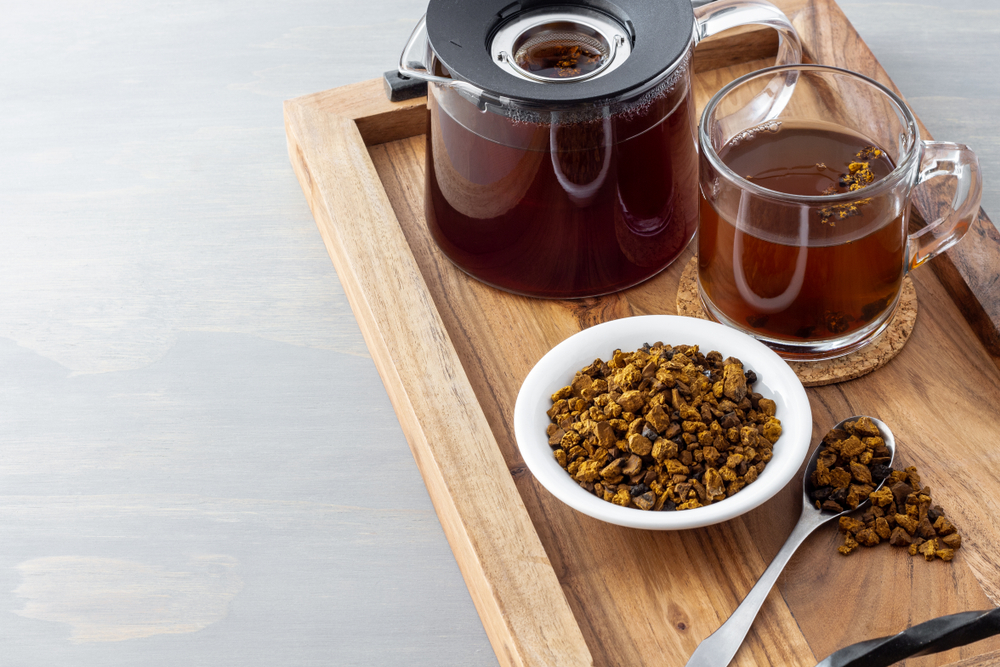 Mushroom tea won’t taste like your average cup of Earl Grey or English Breakfast, but it will make the challenge of dosing magic mushrooms a whole lot easier.

If you’ve never had or dosed magic mushrooms before, we highly recommend that you do. If you’ve had, or even if you haven’t just yet, you’ll be able to appreciate the fact that magic mushrooms and shrooms just simply do not taste very good.

We wish we were giving you an overstatement, but for many psychonauts both old and new, the taste of dried magic mushrooms is definitely not a very appealing one.

A bit dry and spongy with a slight herbaceous and fungal taste, actually macerating the fungi in your mouth can be one of the most difficult parts of going on a trip – but that’s only if you don’t know how to brew a mug of mushroom tea!

Here’s how to overcome the shroomy taste and start your mushroom trip with a warm mushroom embrace!

How to Make Mushroom Tea

To begin with, psilocybin, the chief compound found within magic mushrooms and shrooms that gives its users a psychedelic experience, is completely water soluble. If you’ve made weed tea before, this won’t be anything like it.

Decarboxylation and baking your shrooms aren’t required – all you’ll have to do is cut em’ up and get some hot water!

Here’s what you’ll need to get started:

Here’s how to brew your own cup of psychedelic mushroom tea.

2 infusions is really the limit on how many times you can reuse your magic mushrooms. Any further and they won’t be as potent or as effective.

Before you get too gung-ho on this shroomy beverage, be sure to look up how long do shrooms last to find out your proper dosage and what to expect!

The Benefits of Mushroom Tea

As we’ve discussed above, the biggest argument for brewing a cup of mushroom tea instead of eating it as is is to mask some of the unpleasant tastes and textures of eating it raw.

Another underappreciated benefit of drinking mushroom tea is that doing so can actually reduce the nausea and other disorienting feelings that can come from the mushrooms onset.

Raw magic mushrooms have a tough, fibrous outer cell and can be hard on our stomachs to digest, leading to some intense feelings of nausea.

However, brewing a cup of mushroom tea allows you some small part in alleviating these feelings. A bit of ginger, mint and even honey can do wonders in settling an upset stomach.

Some additional ingredients, such as lemon and orange juice, can actually start changing psilocybin into psilocin in your cup before you even drink it! Psilocybin is a prodrug, meaning that the substance itself is non psychoactive and needs to be metabolized before it can be felt.

The addition of citric acid can make the onset of effects come on much faster and a lot stronger – which can both be a positive or a negative depending on who you ask!

If buying shrooms and cutting them up to brew your own cup of mushroom tea doesn’t sound too appealing to you, there are a variety of fun, tasty and prepared alternatives that’ll easily get the job done!

Pre-infused mushroom tea mixes are a simple and easy way to dose without having to think too hard about the overall process. These teas usually come flavored with additional ingredients such as tea mixes and sweeteners to make the experience more palatable.

Not a fan of tea?

Shroom infused chocolates and even gummies are another possible avenue for getting your dose of shrooms in easily and effectively.

These sweet confections mask the taste and flavor of mushrooms extremely well, making you almost forget entirely that you’re about to go on a psychedelic journey!

Is Shroom Tea Right For You?

When brewed the right way, making a cup of mushroom tea instead of eating your shrooms straight up can make your psychadelic experience much more pleasant.

We highly recommend adding some additional ingredients such as ginger, lemon and mint to counterract the nausea that’s so typical when it comes to consuming mushrooms. Not only will it make your tea taste better, it’ll help settle your stomach and prevent any discomfort later on in the trip.

For those feeling a bit skittish towards brewing mushroom tea, alternate options such as premade tea mixes and shroom edibles exist as well. These options might even be better for a first time since you’ll know exactly how large of a dose you’ll be getting!