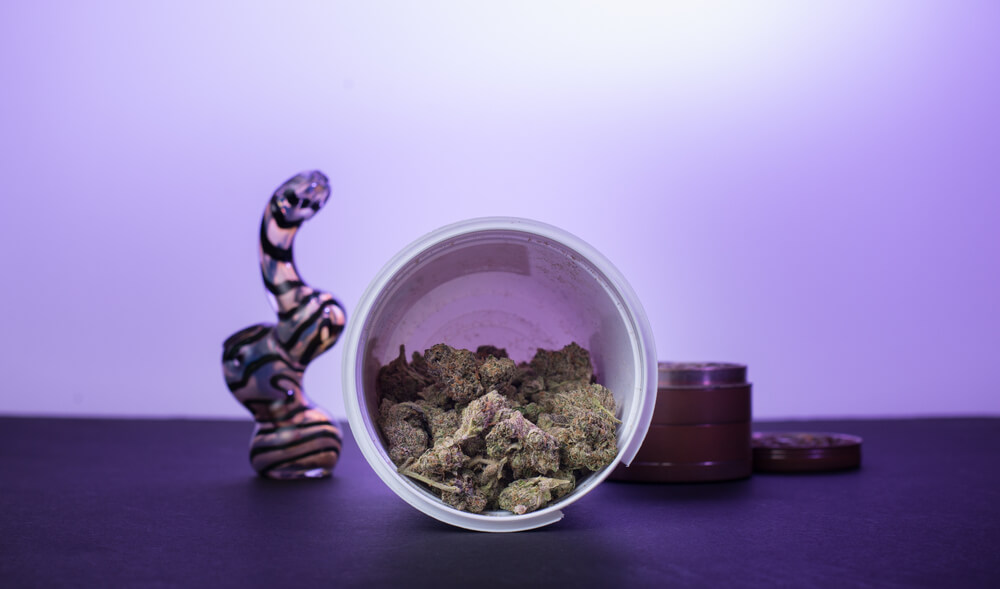 Even the most experienced smokers are susceptible to being confused about the difference between a bubbler vs bong. Like people, bongs and bubblers come in all shapes and sizes and are beautiful in their own way.

Still, even if you’re no stranger to cozying up with some Love Potion #9 or indulging in some Blueberry Cheesecake, we are here to give you the run-down about the contrasts between a bong and a bubbler.

What is a Bong?

Bongs are smoking devices used for marijuana or tobacco. They work by filtering and cooling smoke to prevent burning the herb. They usually possess a small bowl that holds dry bud.

Once you light the weed in the bowl, it will burn (obviously). As it burns, you inhale. The water at the bottom of the bong bubbles as the smoke rises through the chamber and enters your body.

You are likely to find bongs made from various materials, including glass, acrylic, bamboo, and ceramic. You can even make them out of fruit or vegetables when you’re really in a pinch.

They also come in multiple styles. If you’re looking for an effortless smoking experience with dry weed, opting for a bong rather than rolling papers is likely to provide a smoother toke.

What is a Bubbler?

Bubblers look more like pipes rather than your ordinary bong. They’re similar to a bong in that there is a bowl where you place dry weed and a chamber to hold water.

The key difference of a bubbler is that they are usually smaller. As such, they hold less weed and less water.

However, the smaller size does make a bubbler more portable if you’re looking to toke on the go or take it on a journey to find the ideal smoking spot.

What makes bubblers great is they combine the ideal features of a bong in terms of a smooth toke with the convenience of a small water pipe that you can take anywhere.

Regarding the smoking method and what they do, a bong and a bubbler are quite similar concerning the overall smoking experience. Both are a water pipe that filters and cools the smoke.

Since they are a water pipe, you can take longer, smoother hits without fearing that you will cough up a lung every time you inhale.

A bubbler also possesses the same basic features of a bong, with a bowl, stem, and chamber for the water, albeit in a more compact package.

The Differences Between a Bong and Bubbler

The primary difference between a bubbler vs bong has already been mentioned: size.

A bubbler has a shallower bowl, meaning that if you are sharing (because, as we all know, sharing is caring), you will likely have to pack multiple bowls to enjoy smoking with your friends.

Because of their compact size, you can’t customize a bubbler like you can a bong. The design is straightforward and meant to provide a practical handheld alternative to a regular-sized bong.

So, a bubbler may not be the right choice if you’re looking to add a ton of neat features or accessories.

Another critical difference between a bong and a bubbler is how difficult they are to clean.

Depending on how intricate your bong’s design is, you risk potential damage every time you have to clean it, especially if it has more delicate features.

However, one advantage is that you can take a bong apart and split into individual parts for a more thorough clean, whereas a bubbler is one piece.

Because bubblers have a more straightforward design, they are far easier to get clean. However, they also get dirty a lot quicker, so you will have to clean your bubbler more frequently.

A bubbler also offers an ideal compromise between a dry piece and a water pipe. It may not provide as smooth of a toke as a bong, but your lungs likely won’t hurt as much when you inhale like they would with a joint hit.

This is because most bubblers are made of a thicker type of glass.

Ultimately, there are pros and cons to both a bong and a bubbler. It very much depends on your smoking needs.

If you’re looking for something that you can easily transport and carry inconspicuously, a bubbler would be the way to go. However, if you’re sitting on the couch and hanging out with your friends at home, you can’t go wrong with a classic bong.

In times like these, it’s best to channel the more, the merrier mentality and think, “why not both?”