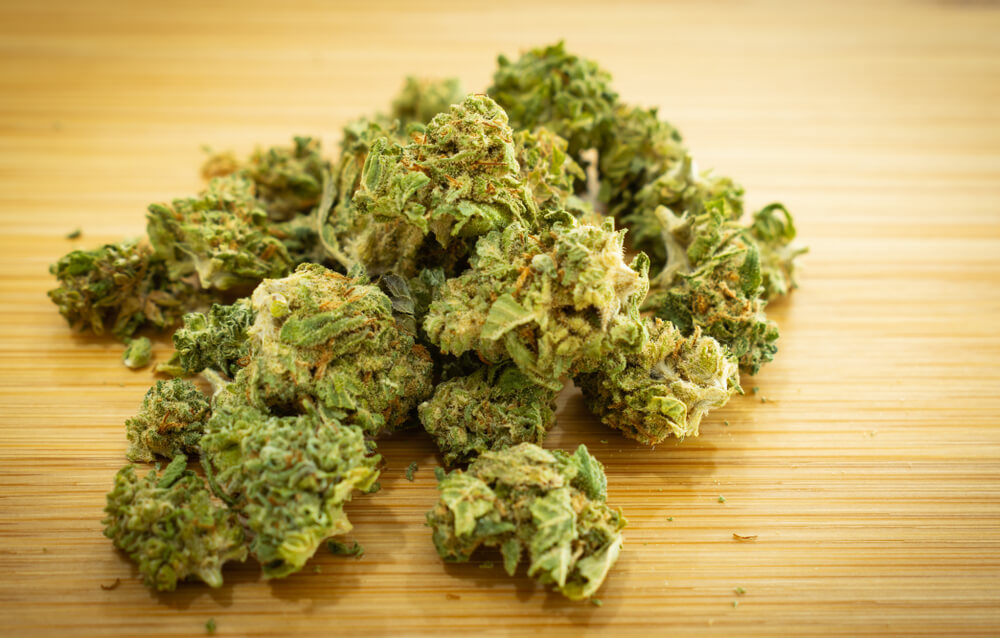 In staying true to one of the trippiest natural wonders in the world, the Northern Lights strain channels the magic of the Aurora Borealis while providing the added bonus of a calm, relaxing high.

An award-winning indica, the Northern Lights strain, is a legendary favourite among medical and recreational cannabis users for its relaxing properties and soothing effects on the body. It is widely known for its two-hit and quit nature, meaning that, even though it’s indica-dominant, the Northern Lights strain can still pack a punch, with THC levels reaching between 16-21%.

After a couple of hits, you’ll definitely feel it. Trust us.

Northern Lights has a sweet, earthy flavour and multiple medical benefits, including pain relief, aiding with insomnia, lack of appetite and relieving some users’ anxiety and depression symptoms.

It’s no wonder that the Northern Lights strain has a loyal fanbase of both old and new cannabis users.

In this article, we will outline five reasons why the infamous Northern Lights strain lives up to the hype.

It is Indica Dominant

Many recreational and medical marijuana users love indica dominant strains such as Northern Lights because of the relaxing, calming effects it has on the body.

If you’re looking for a bud that will help you mellow out on the couch after a long day, relieve stress, and boost your mood, Indica dominant strains are where it’s at. All you have to do is sit back, relax, and take a hit and you’ll understand why strains like Northern Lights are the go-to for many Indica lovers.

While the main differences between sativa and indica at this point are strictly physical, indica has a much longer history in terms of its use for medical purposes. More specifically, for its pain-relieving properties.

Indica dominant strains like Northern Lights are also known for their higher ratios of THC to CBD, meaning that it will give you a delightful and powerful buzz and body high while also taking your mind on a euphoric journey. So, not only will you feel like you’re on Cloud 9, but you’ll be stoked on life too.

All in all, it’s a win-win for body and mind.

The Northern Lights Strain for Lights Out

Since Indicas are widely known for their ability to help with sleep conditions such as insomnia, Northern Lights is a popular favourite to have in the evening because it will likely help you fall asleep.

One of the many reasons for Northern Lights strain being one of the most popular strains of all time is because it helps with both mental and physical relaxation. It calms the mind while relaxing the muscles in the body, providing optimum snoozing conditions.

It’s like the cannabis equivalent to having a sleepy-time tea or a warm glass of milk. Except, it will make you feel all warm and fuzzy for a different reason.

If you’re having trouble falling asleep, or have a tendency to wake up in the middle of the night, Northern Lights may be of benefit to try to catch some much-needed z’s.

In a study conducted in 2018, out of 409 adults suffering from a specific condition of insomnia, 60% of them opted for Indica dominant options like Northern Lights to help them sleep.

Many Use It For Anxiety and Depression Relief

Due to its soothing nature and upbeat, mood-boosting effects, many users suffering from anxiety and depression are massive fans of Northern Lights.

Of course, the dosage is important. Some users have stated that consuming Northern Lights in higher dosages can increase anxiety, but that can be a typical side-effect for many strains.

Still, another big reason as to why Northern Lights is one of the most renowned strains of all time is because users benefit not only from the pleasant body high, but it also serves to help relax the mind.

Anyone prone to anxiety can relate to feeling overwhelmed and stressed, and wishing there was a way to curb the feeling. Northern  Lights presents a solid option to help you mellow out and unwind.

It Helps Increase Your Appetite

Since it’s Indica dominant, Northern Lights is likely to increase your likelihood of succumbing to the munchies.

Indicas can have the effect of stimulating appetite, meaning that you should probably have some choice snacks lying around if you plan on partaking in some Northern Lights.

The fact that it makes you hungry is largely in part due to its higher THC content. This reason is why it is a favourite not just among recreational users, but also for medical purposes such as in those suffering from eating disorders such as anorexia or cancer patients undergoing chemotherapy.

Those looking for an easy cannabis plant to grow at home look no further than Northern Lights.

Growers love this strain because it grows fast and flowers quickly. If grown indoors, it can also supply multiple cycles each year.

The plant flowers for roughly six to eight weeks, making it an ideal strain to grow for those looking to yield high-quality weed with minimal effort. It grows best in environments with high levels of nitrogen.

It is a perfect strain to grow for first-time growers due to its easy-going nature.

Northern Lights Strain – A Legend For A Reason

There are many reasons why Northern Lights is one of the most legendary strains of cannabis of all time. Whether you are a seasoned toker or new to the scene, there is no difficulty understanding how this strain won its claim to fame.

With its multitude of health benefits and the combination of a fantastic body and mind high, Northern Lights is an epic strain that isn’t likely to lose its popularity any time soon.