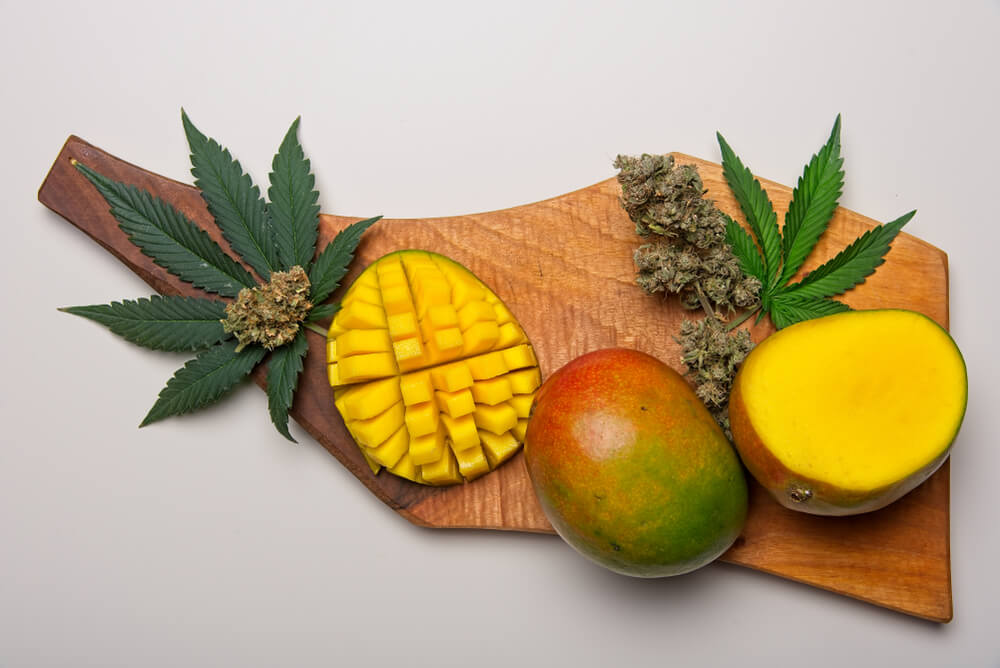 Myrcene is just one of over 150 different types of terpenes found in the cannabis plant.

However, while some of these may only exist in tiny amounts in certain strains, this is not the case for myrcene. Possessing antimutagenic, analgesic, anti-inflammatory, and sedative effects, there is more to this tiny terpene than meets the eye.

In fact, it’s full of surprises!

By the end of this guide, you’ll learn everything there is to know about myrcene. We’ll discuss its effects, what it is used for, and where it comes from.

Without further ado, let’s dive into the tenacious world of the talented terpene, myrcene!

It also happens to be one of the most abundant terpene varieties produced by cannabis.  Technically, myrcene is a monoterpene, which is a subcategory of terpenes and is also a precursor for many secondary terpenes.

Like many of the terpenes present in cannabis, myrcene is non-toxic. It is often used in recipes as a flavour additive due to its fresh, citrusy notes coupled with hints of spice. In this way, you’ve probably eaten far more myrcene than you ever realized.

It also possesses numerous potential health effects and medical benefits, including pain-relieving and sedative effects. Due to these properties, particularly as a sedative, it can also be used as a natural sleep-aid and anti-anxiety option for those needing some rest.

According to anecdotal evidence, the potential of myrcene in cannabis is vast. When combined with THC and CBD, it helps produce an entourage effect to enhance common benefits.

Myrcene, along with β-Caryophyllene, is the most common terpenes in the C. sativa L. plant. It also happens to be the smallest terpene in size. Even with its small size, many cannabis strains contain high levels of this terpene.

Myrcene has a wonderfully earthy and citrusy aroma. You may also detect subtle notes of fruit flavours similar to red grape or balsamic. Finally, there is just a hint of spice to finish it off.

Where Does Myrcene Come From?

As we said previously, myrcene is found in various foods and herbs. Examples include lemongrass, mangos, verbena, bay leaves, thyme, and hops. For hops, specifically, myrcene is the compound responsible for the spicy, peppery and vinegary fragrance found in beer.

For something that is so widely and commonly found in nature, myrcene remains somewhat overlooked and unmentioned.

Of course, myrcene is also present in the cannabis plant. In fact, it is the most likely terpene to be dominant in the flower, meaning it is one of if not the most commonly-occurring terpene within the plant itself.

However, that said, the genetics of the plant and the growing environment will have a significant impact on the ultimate levels of myrcene found in the bud.

What is Beta Myrcene Used For?

It has been shown to be able to lower the blood-brain-barrier, helping  THC and CBD crossover and produce the healing effects we all know and love.

Beyond this, there are multiple other perks of the myrcene terpene, including:

Myrcene has been shown to have significant anti-inflammatory and anti-catabolic effects (anti-breaking-down) in human chondrocytes (bone-building cells).

These findings come from a study exploring the potential to use myrcene as part of osteoarthritis treatment. Based on the results, it has the potential to reduce the breakdown of cartilage.

Myrcene is also a naturally-occurring analgesic, meaning that it possesses qualities and properties that can contribute to pain relief.

Researchers indicate that myrcene, along with limonene and citral, has sedative effects and provides motor relaxation benefits. Further evidence supports the claim that it reduces pain sensations in rats.

Due to sedative properties and the ability for motor and muscle relaxation, Myrcene shows promise in treating various sleep conditions, such as insomnia.

Not only will it help you fall asleep, but it will also likely help you stay potentially 2.6 times longer, according to some research.

Of course, these are all theory-based at the moment, with most experimentation conducted on mice and rats. In this way, there is so much more for us to learn in terms of the impacts and benefits of myrcene in potential human trials.

However, below, we’ll discuss the potential effects of decent levels of myrcene in your bud.

Myrcene is thought to have numerous medical benefits contributing to cannabis. It is one of the many terpenes that contributes to the entourage effect.

The entourage describes the notion that combining terpenes and cannabinoids produce greater effects than the compounds by themselves.

While other terpenes add to getting high and produce unique effects, myrcene is unique. What makes it special is that it is one of only a few terpenes that also interact with our natural endocannabinoid system.

For those unaware, we have two major cannabinoid receptors inside our body, CB 1 and CB2. It is CB1 receptors in the brain that THC acts upon to produce the familiar cannabis high.

Myrcene appears to target and influence the CB2 receptor, which is found throughout the body. This CB2 receptor is not involved with the psychoactivity that CB1 is. Instead, it influences immune functions. CBD does not target, but it does influence CB2 receptors in ways that produce the many benefits of CBD.

So, it would appear that myrcene may enhance some of these benefits that occur from the actions of the CB2 receptors. This includes inflammatory and immune responses.

Does Myrcene get you higher?

All of this leads us to ask this important question, does myrcene get you higher? The answer is maybe. It all depends on what effects we are talking about.

Myrcene appears to work best in promoting the sedative effects of indica strains. It helps promote a comfortable state of being, familiar to those seeking the couch-lock effect.

It is no wonder that this terpene is so highly prevalent in Indica strains, as breeders likely long recognized this useful combination. If you’ve ever wondered why some Indica strains may help relieve muscle tension better than others, it may have to do with the presence of myrcene.

In regards to the stimulating and creative sativa high, myrcene is not likely to get you higher.

What Strains are High in Myrcene?

There are far too many strains to name there since this terpene is so prevalent. However, some top examples of strains to try if you’re looking for a high myrcene level include:

As always, you can also ask your local budtender what strains they have high on myrcene.

Whether in your lemongrass tea or Blue Dream joint, the relaxing and pain-relieving effects of the terpene myrcene help provide the relaxing sensation that we all know and love from our favourite icky sticky.

However, the potential benefits and applications of this terpene don’t just stop at helping us mellow out, with its anti-inflammatory, sedative and pain-relieving properties, myrcene also shows great potential for various medical uses.

Either way, the beauty of the popular and widely found terpene is that there are countless strains that possess it, meaning more bud to play around and experiment with to find the one that suits you best.

Like with any other weed product, be sure that you are purchasing from a trustworthy and reputable dispensary to ensure quality and safety.