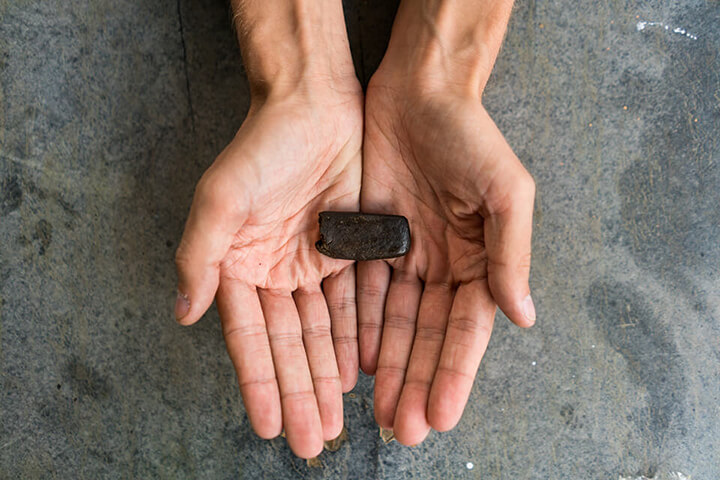 Home Editor's Picks What is Hash? A Guide for How to Use and Make Hashish
Twitter
Google+
WhatsApp
Facebook

What is hash? Well, for one, it may be the forefather of all cannabis concentrates.

Why? Because its as ancient as concentrates come, recorded to be in use for at least 900 years.

But with this said, don’t let hashish’s old age fool you.

Because when compared to shatter, live resin, or the other plethora of concentrates available today, hash still holds itself up quite well.

In this article, you’ll find out. So to get you started on all of hash’s essential details that are critical in giving you a positive experience, here’s what we’ll breakdown. 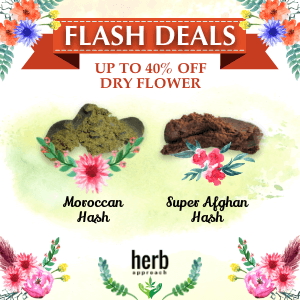 In straightforward lingo, hash (hashish) is a concentrated form of cannabis that’s usually smoked in joints, pipes, bongs or hookahs.

And it’s typically made through extracting trichomes (resin and crystals) from dried marijuana flowers.

When these trichomes are collected, they’re compressed with heat and pressure into different forms such as balls or cakes, resulting in textures that are either solid or paste-like.

Along with coming in different forms, hash can vary in color, from reddish-brown to black, to dark yellow and traditional cannabis-green.

As you can imagine, hash’s different forms and colors represent its many types. This is dived into with a lot more detail in the section “how hash is made.”

How Much THC Does Hash Have?

Since hash is a cannabis extract, it holds more cannabinoids and terpenes, the compounds responsible for marijuana’s smell/taste and psychoactive experience, thus delivering a much heavier punch than dried flowers.

For traditional hash, THC levels are in-between 20-50%, depending on the strain and the expertise of the maker. But for more specialty types, like bubble hash (discussed below), THC levels can reach upwards to 60%.

This means when it’s compared to dried flower, hash can have 3-6 times as much THC! Given that dried flowers have roughly 10-20%.

With its potency in mind, what are the best ways of consuming hash?

How to Use Hashish

Put simply, hash can be consumed in a myriad of ways, some more traditional, and others less so. For an optimal experience, here are the best ways of how you can use hash today.

The oldest way to consume hash is through direct ingestion.

Yes, you can swallow hash out right.

Or if you prefer to be creative, it can also be used as an ingredient for the many different types of marijuana edibles, such as hash brownies, hash butter or hash gummies.

But if you do embark in eating hash through a pot edible, just remember, ingesting it is about 5 times more psychoactive than smoking it. Well, generally.

And the onset, that is, the time it takes for the experience to take hold, can be as fast as 30 minutes or as long as 2 hours.

The reasoning behind its elevated potency and delayed effect is due to the role our liver plays in processing THC when it’s in edible friendly forms, turning it into the more stronger 11-hydroxy-metabolite.

Also, the science as to how hash, or rather, how cannabis stays psychoactive when baked, cooked or put in high temperatures is called decarboxylation.

How to Smoke Hash

1) Rolling hash into a joint….

Rolling hash into a dynamic, funky joint is another way of getting the most out of it.

Here are some guidelines:

If the hash at your disposal is brick hard, place it on a metal spoon or key and gently apply heat to it until it’s softer to the touch. Then, using your hands, crumble the soft hash into tiny pieces, and further mix it with dried flower while rolling a joint. If you want a milder experience, perform these same steps while rolling a tobacco cigarette.

In the case where your hash is extremely paste-like in texture (bubble hash), it can be coated on the outside of a finished rolled joint or cigarette, as if the joint/cigarette was dipped in the paste.

And, if you’re feeling adventurous, you can do all 3 –  a hash sprinkled dried flower and tobacco rolled joint.

2) Packing hash into a bong or pipe…

Another extremely popular way of smoking hash is through using a bong or pipe.

Here are some simple directions:

For bongs and pipes with a screen, simply placing hash on the screen, then lighting it for a second or two as you inhale usually does the trick. If your bong/pipe has no screen, place the dried flower in your bowl first, then sprinkle bits of hash on top and proceed to light.

But keep in mind, while lighting the goal is not to burn all the hash at once, otherwise, it’s wasted. Instead, for better preservation and to get the most out of your bowl, light a portion as you inhale.

If this doesn’t prove to be a good smoking experience, priming your hash into more smoke ready form, as mentioned above, will do the trick. To do this, place your hash on a metal spoon or key and gently apply a flame until the hash’s texture becomes soft and malleable. Then, break it into pieces and sprinkle it into your bowl, whether by itself or on top of dried flower.

Vaping isn’t the same as smoking, as similar as they may seem. For one, smoking uses combustion as a heating method, which produces a plethora of carcinogens. As for vaping, it applies either conductive or convective heating methods that can produce more enhanced experiences.

To vape hash, you’ll need a few materials for an optimal experience. The first is a dry herb vaporizer, the second is de-gummed hemp fibre and the third is alcohol-drenched, cotton swabs. Here’s a step-by-step guide that will show you how to vape hash in a way the preserves your vaporizer.

Lastly, you can put your hash in a beverage such as the traditional Indian drink ‘bhang,’ or one of the many varieties of cannabis tea. By making bhang, you’ll take part in an ancient tradition dating to at least 2000 BC that continues to this day. Interestingly, ‘bhang’ is said to help with many issues, from dysentery to sunstroke and even speech impediments.

With knowledge of the different ways hash can be consumed in-hand, let’s dig deeper into the ways it can be extracted.

You Can’t Beat These Deals, Even if You Tried!

How to Make Hash

Remember trichomes? Those tiny crystals just glistening all over your cannabis buds? Well, these areas hold the highest concentration of cannabinoids and terpenes.

Since these are the cannabis connoisseur’s prize, people tend to collect them as left-over bottom using something as simple as a three-grinder chamber. These left overs are called ‘kief’ which, when applied with pressure and heat, create hash.

However, there are so many variations of how heat and pressure can be applied to create hash, resulting in many different forms, each with its unique aesthetic.

Here’s a deep dive into 4 different types of hash, and how they’re made.

4 Important Ways of How to Make Hash : An Overview

Finger hash uses one of the earliest techniques of making hash – a technique that’s still used in India today.

To start, it’s made through gently rubbing dried buds in human hands, which results in a lot of sticky resin. This resin is then scraped off, collected and then made ready to be pressed into patties or bricks with everyday tools.

Also referred to as hand-rubbed hash, it should be smooth, hard, sticky and brownish-black in color. If the inside is very green, then it simply means there’s extra plant material caught in it.

The next hash-making method also requires hand-rubbing, but the process is made a little easier by using screens.

Dry-sift hash is a technique where dried plants are hand-rubbed across woven screens to create friction, forcing trichomes to fall into a collection tray on the other end. What’s collected is another concentrate known as kief, the pre-cursor to hash, which then gets pressed together by hand or with a mechanical press to resemble all of hash’s qualities.

In the 1960s hash experienced a resurgence in the western world. However, during this time, most of the supply came in the form of hard-pressed, solid hash formed from heat and pressure from places like Nepal, Morocco and Afghanistan.

This changed in the 1980s when John Gallardi’s ‘master sifter’ machine revolutionized how hash was made. According to the book ‘Beyond Buds’, the machine separated trichomes using vibrations, and did so commercially, creating hash in bulk.

For more information about this technique, we encourage you to read the book.

As mentioned above, bubble hash, if made the right way, can hold up to 60% THC, being on par with other cannabis concentrates that are created with solvents.

But unlike these other solvent concentrates, bubble hash is solvent-free, which is one of its main features for enthusiasts.

Bubble hash is made essentially by freezing cannabis plants, so terpene and cannabinoid-rich trichomes can be isolated. Here’s an overview of what takes place.

Bubble bags (mesh filters) are placed into a bucket, where water, ice and cannabis are mixed in. The cannabis is then further stirred in this extremely cold water, resulting in a thick mix. This mix is then passed through 3 to 5 mesh screen filters to isolate resins even more. Then, like most hash types, presses come into the equation for the finishing touch.

What is Hashish Explained…

Hash has persevered throughout history, and it’s for good reasons. The cannabis concentrate is both versatile in how it can be made and how it can be consumed – all while having a strong THC and terpene profile.

Also, if you’re seeking a more traditional and culture-backed cannabis experience, hash may be one of the many cannabis products you want to explore.

Either way, using this detailed guide of what is hash, you’ll be a more informed, responsible and thoughtful cannabis practitioner.

Or in other words, you’ll be well on your way in creating optimal experiences for both yourself and friends.

Hash is a Versatile Extract, But It’s Hard to Find These Days. Not at Herb Approach, We’ve Got a Hash Collection That Reminds You of the 80’s! 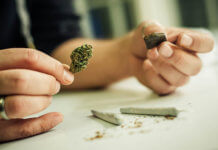 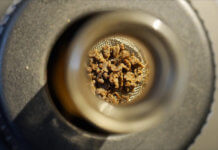 How to Vape Hash in a Way That Saves Your Vaporizer

How to Make Bubble Hash: Clean, Easy and of the Finest Grade